Trimi Dauti leads Thrive’s experienced team. Trimi, originally from Southern Europe, graduated with honors from The University of Prishtina. With heart and soul dedicated to food, beverage and service, Trimi followed his entrepreneurial spirit and opened his own Atlanta restaurant in 2006. After years of restaurant management, hospitality expertise, and a vast knowledge of wine and international cuisine.

Trimi joined the Thrive team in 2008. He is pleased to offer a stimulating wine list at Thrive and excited to have introduced new menu items in May 2010. Dauti knows the true meaning of customer service and will make sure that your experience at Thrive leaves you completely satisfied. 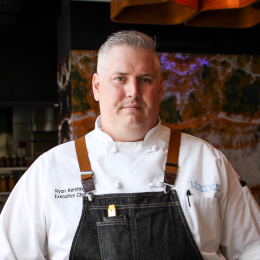 Hailing from Dearborn, Michigan, Chef Ryan Kersting moved to the Metro Atlanta area, at a rather young age. Like most tales of self-discovery, Ryan originally attended Georgia State University, where he pursued a degree in risk management- a great departure from where his talents would eventually lead him. While working in that field, he shortly realized that his true passion for a creative, yet tactile career had not been fulfilled.

Choosing to embark on a new journey, Ryan then sought out his mentor, Executive Chef Stephen McGuffin, a long-revered culinary expert in metro-Atlanta. Under Chef McGuffin’s tutelage, Chef Ryan received hands-on, Classical French Culinary Training at Atlanta’s original fine dining restaurant, Anthony’s. It did not take long before Zagat duly recognized Chef Ryan as Atlanta’s Upcoming Chef, in 2008. After many years of working in many of Atlanta’s favorite restaurants, Chef Ryan has found a new home, introducing his robust and well rounded culinary portfolio to at Thrive Atlanta, beginning in 2018.

Bringing to bear old methods of preserving, canning, and smoking, the menu will feature Southern staples with Asian and modern influences. Our guests will notice frequent menu changes, as a result of the Chef’s commitment to bring the best seasonal produce available from his local and regional suppliers. Chef Ryan’s passion, old southern techniques, and flavors, with new and inventive twists, will keep Thrive’s guests excited to see what will come next.